In some applications e.g. marine, steel and paper industries, ingress of water is a major problem, and removal of water in oil can become a necessity. In order to avoid excessive amount of free water settling out in bearings and gears, special oils with the ability to hold water suspended, have been developed e.g. oil for paper machines.

Water can be dissolved in oil in two ways:

For optimal protection of machine components the water content should not exceed 30% of the saturation point. Emulsions of water/oil occur mainly due to shear forces in machinery e.g. in pumps, gears and valves.

The problems caused by emulsified water are similar to those of free water i.e. corrosion, cavitation, micro-pitting and oil degradation. Degraded oil only separates water poorly, because the oxidation products (acid, aldehydes, ketones) are polar and encapsulate water droplets, hindering merging of drops and separation by gravitation.

For effective removal of water in oil, use CJC® Filter Separators for eg.:

For effective removal of larger amounts of water in oil use CJC® Desorbers for eg.: 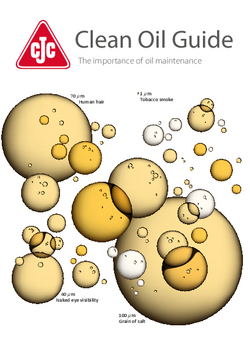